Autism Queensland provides a comprehensive range of education, therapy and support services to assist children and adults on the autism spectrum, their families, carers and others supporting and working with them. 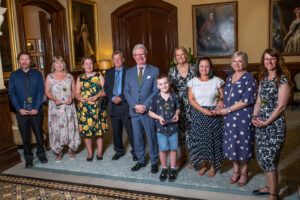 Autism Queensland has announced the winners of the 2020 Creative Futures Recognition Awards, an annual event that recognises the contributions of people living with autism.

The Governor of Queensland and Autism Queensland Patron, the Hon Paul de Jersey AC, presented the awards at a morning tea at Government House, Brisbane today, Thursday 3 December, to coincide with the International Day of People with Disability.

Hervey Bay teenager, Xanthe O’Connor received the Individual Achievement Award for fulfilling her dream and creating the Hearts & Hands Signing Choir, an all-inclusive community choir with about 20 members. Non-verbal until the age of 8 years, Xanthe’s first form of communication was through song. She was the 2020 School Captain of Hervey Bay Special School.

Eight-year-old Ryder Lee from Ipswich was presented the Peer Support Award, a new category created in 2020 following his nomination. Ryder was nominated for the award by Renee Manly in recognition of the support and compassion Ryder shows her son Caspian, and for being the role model she feels he is, even at this young age.

The Patronage Award was awarded to The John Villiers Trust which has provided substantial and ongoing support to Autism Queensland for many years for its regional services. More recently they became a major funder for a substantial redevelopment of the AQ School campus at Sunnybank Hills, the same site the late John Villiers visited regularly and provided financial supports for building works during his lifetime. Master Builders Queensland, also a major donor to this project, were presented with a special commendation in this category.

Autism Queensland thanks His Excellency for again hosting the event and everyone who submitted nominations for this special annual event.